Perched on the summit of the hill overlooking the village of Assonora, St. Michael’s Chapel has been for more than a century the most conspicuous landmark of Assonora, being visible not only from the village  below but also from the vast surrounding areas. Formerly, when it was better cased for, and was whitewashed every year after the monsoon, it gleamed like a bright jewel  on the hill of Assonora, and was considered by the villagers as the pride of their village.

This chapel was built in 1885 by Fr. Antonio Xavier de Braganza of Mapusa (mainly, it is said with his own resource) when he was the Parish Priest of Assonora. From all the word-of-mouth accounts that have come down to us in the village Fr. Braganza was not only a man of great piety but also a hermit with a poetic temperament. That is a man who sought to commune with God in solitude, amidst the silence and the beaty of the hills. We can imagine him climbing up the steep hill-slope and coming for the first time to the spot where now the chapel stands, and moved by the peace and serenity of the place, in a moment of inspiration deciding to build a house of worship here. For the place does inspire one with feeling of reverence. From the vantage point where the chapel stands one gets a breath-taking view of the surroundings. In front to the south below one sees a stretch of open country including Assonora, Sirigao Corjuem, Aldona, Calvim, Pompurpa, and far in the hazy distance, Chorao and Divar. To the north, a rocky plateau stretched from the chapel to the borders of the valley of Advalpal. And to the west, one sees immediately below, the deep ambexi valley with it’s thick, dark green forest surrounding the ambexi spring at the bottom of the valley.

Fr. Braganza built the chapel and aptly dedicated to St. Michael, the mighty Archangel Warrior-servant of God and subduer of Satan. In our boyhood days we used to see in the chapel an impressive statue of St. Michael standing with one foot on stan and holding a sphere in his hands- a statue most probably installed by Fr. Braganza himself. By dedicating the chapel to St. Michael, Fr. Braganca intended the great archangel to the guardian of the village; and indeed since his days the people of Assonora have felt that St. Michael was standing sentinel over their village, keeping an ever-vigilant watch, and warding of evil. And formerly, the village working people returning at nightfall from their hard day’s labour in the fields, or on the hill-slopes, would raise their hands towards the chapel, and murmuring the great Archangel’s name   would invoke his protection and his blessings.

The edifice built by Fr. Braganca was quite big-the chapel itself is 54 ft (36 cubits) long and 45 ft (30 cubits) broad, and has a loft for the choir. And behind and attached to the chapel Fr. Braganca had built residential quarters consisting of three rooms. All the stone needed for the construction was quarried from the rocky plateau just behind the chapel. The other building materials like sand and lime (chunam) must have been carried from the village up the hill by the labourers on their heads. There was no road going up, so Fr. Braganca built a pathway  from the village up to the chapel through the steep and rocky terrain. But not even a bullock cart could go up this pathway. Our elders used to tell us how Fr. Braganca with one attendant would stay at the chapel for days together, living a frugal life of a hermit, spending his time in meditation and prayer, amidst the stillness of the hills, amidst the  wilderness that surrounded the chapel in those times, i.e. the end of the nineteenth century. The attendant would every day go down the forested ambexi valley to fetch from the spring the water they needed for the day, and occasionally he would make trips to the village bazar to bring the required provisions. Fr. Braganca himself would often climb down to the valley to take bath in the cool water of the spring, and to listen to the singing of the birds that the forest then teemed with, more than today and always at nigh- fall as Fr. Braganca sat reading in the dim light of kerosene lamp, and the attendant busied himself with the preparation of the simple evening meal, they would here jackals howling outside.

After spending twenty two long, happy years in Assonora, Fr. Braganca went away leaving St. Michael’s Chapel, his beloved creation, to the people of Assonora. The villagers gradually came to have more and more veneration of the Archangel and also to love the chapel that Fr. Braganca had left them; and apart from coming here to pray occasionally, they came every year on September 29th to celebrate St. Michael’s feast with great fervour.

The whole structure (i.e. the chapel and the attached residential quarters) was originally built of the stone and mortar. Such a structure, situated on the top of the hill, being exposed to the fury of the elements naturally suffered a noticeable damage in the course of half century. So in 1937 the Assonora Union ( today renamed Assonora Association) partly with its own money and partly with contribution from individual inhabitants of the village and from the Assonora clubs in Bombay, got the chapel plastered with cement and also carried out certain other repairs. After this work the itself remained in good condition for a few decades; but the hind part of the residential quarters, which had not been plastered with cement, collapsed sometime in the late forties. And about ten years later the rest of the residential quarters also fell .

During the sixties, seventies and eighties, the condition of the chapel seriously deteriorated as a result of the damaged caused by the elements and by the thieves and other miscreants, and also due to the chapel’s neglect by the villagers. First of all the chapel bell. Which could be heard all over the village, was stolen. Then the roof tiles, roof timber, zinc sheets, doors and windows and even the statues were stolen; and parts of the chapel was left without roof. One of the spires above the façade was struck down by lightning. The villagers carried out some repairs, but seeing all the loss and damage that the chapel had suffered, people in general lost interest.

Fr. Savio who was the parish priest of Assonora from 2001 – 2008 (and who had already succeeded in giving  a completely new and beautiful look to uor church and its surroundings by acquiring land in front of the church and by constructing thereon a pavilion for outdoor services and by planting gardens around the church) intended to take up next the task of renovating St. Michaels’ Chapel. He even started to collect for the purpose but before he could collect the large amount needed for the task he was transferred elsewhere from Assonora.

Finally two of our villagers Fr. Maximian D’Souza (popularly known as Fr. Maxie) and Robert Mendonca Managing Director of Lawrence & Mayo took up the challenge of restoring the chapel to its original state and they formed a trust for the purpose.

Even before collecting the total amount estimated as the cost of this project they began the work and they continued their efforts to collect the rest of the amount needed for the purpose. God has blessed their efforts and now not only the chapel has been restored to its original state but also the residential quarters that had been completely in ruins have been reconstructed as they originally existed.

The people of Assonora and also from other places who had a great love for the chapel and who had a dream of seeing the chapel restored to its former glory have now the satisfaction of seeing their dream come true. The restoration of the chapel has now ensured that the coming generations also feel, as the generation before them felt that the  great Archangel stands sentinel over our dear little village and wards off all harm from it. They shall be moved, at dawn and at dusk as the people in the past were moved to raise their hands towards the chapel and pray for the Archangel’s protection and blessings. 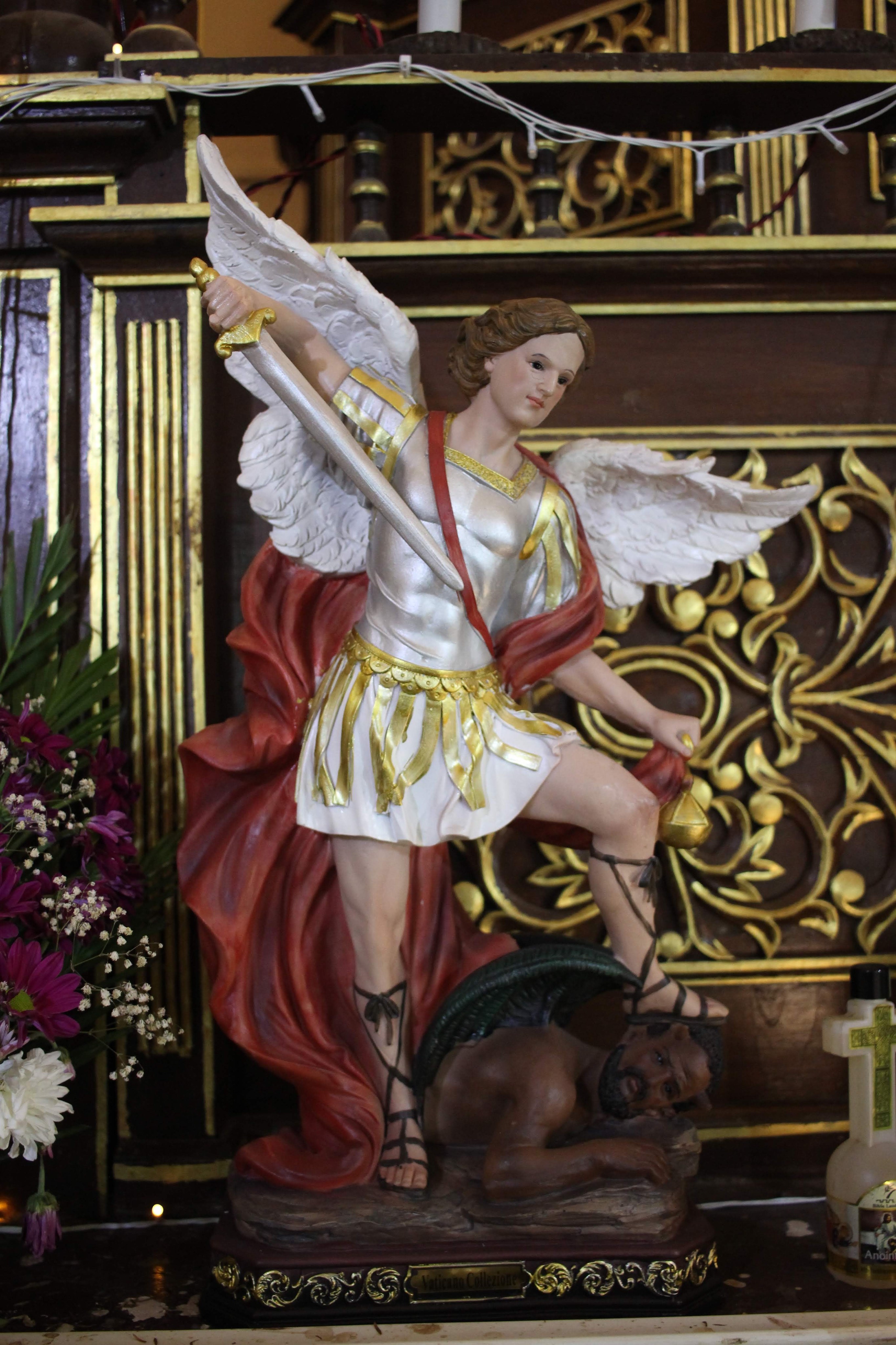